This animation uses d3.js and a small amount of data. The idea is to mirror the lines of the song.

First a set of data is defined in Javascript arrays:

These control the colours of the parts of the rainbow (Lliwiau), the order in which they will appear (order), and the delays between each one appearing (delay).

Next, we define some configuration variables to control how large the rainbow is, and how much space is left around it:

In order to draw the rainbow, we need to use SVG or Structured Vector Graphics. That means we need to add some elements to the HTML page. We do that with the following code:

It asks D3 to select the <div> element which has the CSS class enfys, and add a new <svg> element to it. Next, it sets the width and height so that our graphic is big enough. Inside that it add a new <g> element, which denotes graphics. It then moves in 300 pixels from the top and from the left before starting to draw. (Translate is the technical term for move.)

After that, we have to define an arc, which is the maths name for part of a circle. Arcs are defined by a starting angle, an ending angle and a radius. It easy to think of drawing a circle, but only putting the pen on the paper between the start and end angles.

Computers do trigonometry slightly different to us, they don't use degrees for angles as the distance between each degree changes depending on how big the circle is. Instead they use something called radians. One radian is the same no matter how big the circle is, and is roughly equal to 57 degrees. A full circle goes from 0 to 2 x pi. We want to have a length the 70% of our circumference of our circle (so the length is 0.7 x pi) but centred on the line that points straight up and down. That's why the angles go from Math.PI / 2 to - Math.PI / 2.

Now we come to the graphics bit, actually drawing the lines. In SVG lines are called paths. We use D3's .data() function to draw one for each item in our array:

This creates a new <g> element for each item to hold our path. Lastly we actually draw the animation:

There's lots going on here, so we'll go from the top. First a path is added, and we need to use a transition() as it needs to be animated rather than all at once. The delay() function is used to draw the lines at different times. The delay array doesn't contain absolute values, so the loop adds up everything that happens before this line. The duration() instructs D3 to draw the line over 150 milliseconds. The attr("fill") call sets which colour will be used to draw the line itself, before using the arc generator from before to set the attr("d") or data for the path.

Now you can all Sing a Rainbow with D3 at home! 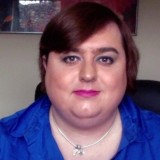 Cameron is the School's Lecturer in Cybersecurity. His research interests focus around Data Science and Learning Analytics. Before gaining his PhD at Bangor in 2019, Cameron was a professional developer, network administrator, entrepreneur and general geek.

This site uses Akismet to reduce spam. Learn how your comment data is processed.